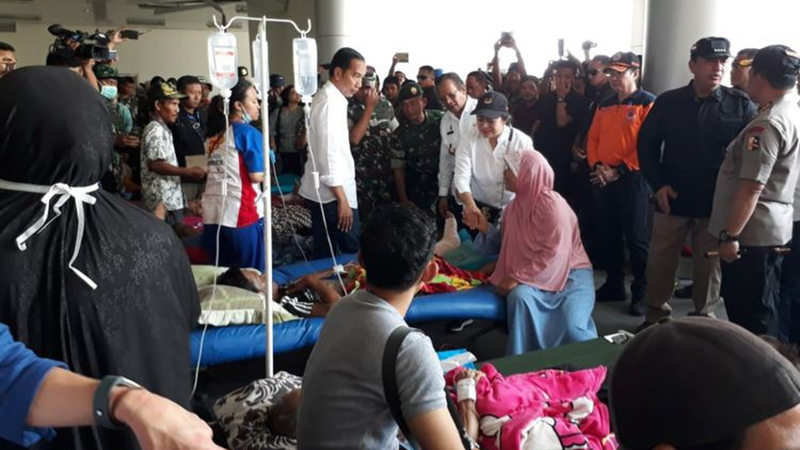 Indonesia has made steady progress to rebuilding Central Sulawesi following the earthquake and tsunami disaster, with recovery operations underway.

President Jokowi highlighted that emergency workers are making progress with relief efforts, reiterating that evacuation efforts are the top priority. ‘After that, the reconstruction and rehabilitation will be done,’ said Jokowi.

The National Disaster Management Agency (Badan Nasional Penanggulangan Bencana, or BNPB) is attending to the needs of the victims of the disaster, including those in remote areas. Coordinating Minister for Political, Legal and Human Rights Affairs Wiranto spoke out on Thursday 4 October 2018 to emphasise the need for transporting food, medicine, shelter and sanitation supplies to those displaced, advising that helicopters were already in operation to reach the more isolated parts of the region.

BNPB Head of Data, Information and Public Relations Sutopo also highlighted that communication has been established with most of the affected regions, with the rest to follow shortly as relief teams of more than 6,300 personnel move through Palu City, Donggala, Sigi and Parigi Moutong to evacuate and rescue victims.

As of Thursday 4 October, 480 survivors of the disaster landed in Surabaya, transported in 3 waves beginning Wednesday evening. The final wave of 180 victims of the earthquake arrived from Kupang and Donggala, Central Sulawesi. Most of those arriving have been able to stay with relatives in East and Central Java, and other arrangements have been made for remaining survivors. 56 survivors also arrived in Tasikmalaya on Thursday.

Residents of Palu City still have limited access to clean water; many water pipelines were severely damaged through the earthquake and tsunami. Resident of Southern Palu District Eni, aged 24, spoke to KOMPAS about how she travels long distances between her home and the river to get water after a spring was uncovered in the river. Other earthquake victims detailed how they have been forced to wash their clothes and bathe in the river due to network outages. Despite these challenges, residents of the area remain hopeful that relief efforts will soon alleviate the situation.

Infrastructure recovery in the region has also begun, including electricity networks and roads leading into the regions affected by the earthquake and tsunami. Logistical support and fuel have also begun arriving in areas damaged through the disaster.

Anutapura General Hospital in Palu has been treating victims of the disaster in tents in the open courtyard behind the collapsed hospital. Herri Mulyadi, Deputy Director of Service for the hospital, said blood supply levels were still able to support victims, saying ‘We are supported by approximately 40 doctors from the Cipto Mangunkusumo Hospital (RSCM), the Indonesian Doctors’ Association, the Ministry of Health and Hasanuddin University. Almost all cities have sent donations of medical supplies, as well as medical staff to assist with the influx of patients.

As of Friday 5 October, the death toll exceeded 1,550 as evacuation and rescue efforts continue to progress. Aid from the international community has begun to reach survivors, with emergency workers delivering the support to where it’s needed most.