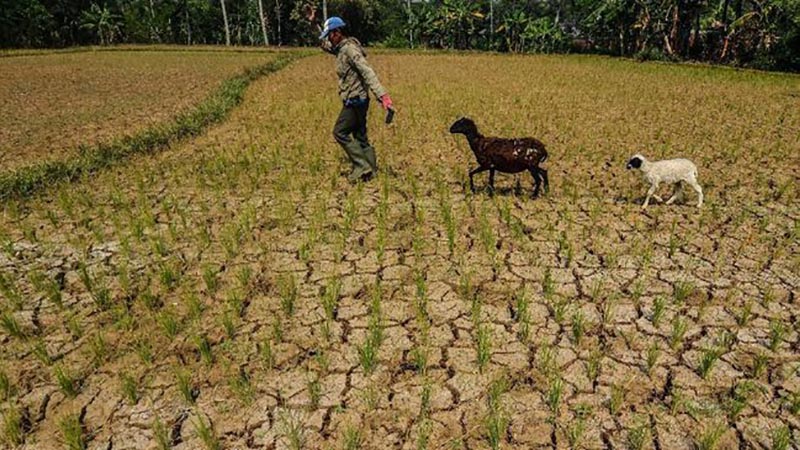 Java and Nusa Tenggara have been the hardest-hit by this year’s dry season and are facing water shortages.

Fifty-five regencies across Indonesia are in water crisis according to the National Disaster Management Agency (BNPB). With drought conditions expected to worsen, Jokowi has called for the preparation of weather modification technology in the form of an aircraft that facilitates artificial rain. Head of the government’s new technologies agency Handoko Seto explains that this technology does not distribute the rain itself, but “seeks to improve and accelerate the fall of rain” through cloud seeding.

While Indonesia receives plenty of rain – in some areas there is a surplus of water – Head of the National Development Planning Agency (Bappenas) Bambang Brodjonegoro says the water crisis is the result of an uneven distribution of rain throughout the country.

Bambang emphasises that poor residents are most vulnerable.

In June, the Meteorology, Climatology and Geophysics Agency (BMKG) predicted that this year’s dry season would be longer than last year’s and peak in August, with the rainy season expected to begin around October.

Alarmingly, the head of BMKG Dwikorita Karnawati says that with climate change, the dry season will increase in severity in the coming years.

Last year’s widespread failed harvests prompted the highest rate of imports in six years, and as such, the Indonesian government is working to protect Indonesia’s commodities in 2019.

Every dry season tends to be harsh for Indonesia’s farmers, but this year has been particularly so. While more farmers have insurance than ever before, the Ministry of Agriculture is pushing for more still to get covered. Insurance coverage is reportedly available for up to 60 per cent of crop losses.

The Minister of Agriculture has also called for insurance to extend beyond rice to include chillis and onions – two commodities that have high production costs, unlike rice, but are considered among the most important products in Indonesian agriculture.

In mid July, Jokowi ordered ministers and regional heads to take steps to mitigate the risks of forest fires and crop failure. He asked that leaders work directly with community, and closely monitor the water supply: “Ministers, heads of institutions and governors should go down to the fields in person.”

A team of Urban Water researchers at the AIC explored strategies for adapting to increasing extreme weather events, to ensure equitable, affordable and safe water services continues in Indonesian cities. This project looked into modelling future scenarios, such as the under a changed climate and with more densely populated cities, as a way to build management strategies using, for example, green infrastructure.

Dwikorita from the meteorology agency adds, “as a maritime archipelago located on active tectonic plates,” Indonesia is incredibly vulnerable to climate change.