IA-CEPA cyber opportunities with Prerana Mehta from AustCyber and AIBC 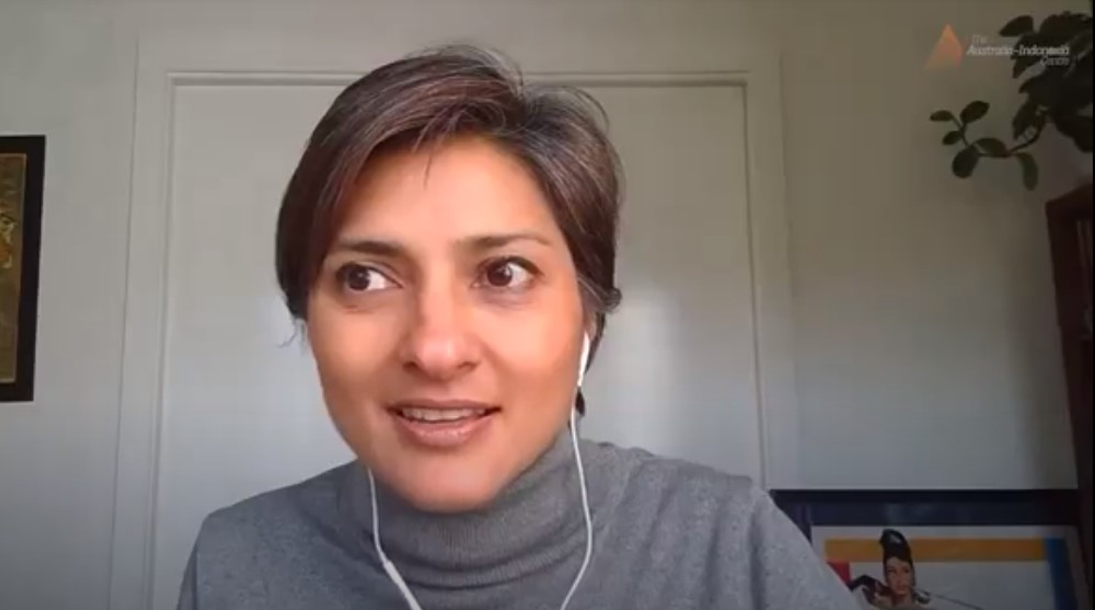 Prerana Mehta is the Chief of Ecosystem Development for AustCyber and the chair of the ACT Australia-Indonesia Business Council (AIBC). AIC Communications and Outreach Lead Helen Brown spoke with her over Zoom about cybersecurity and the new Indonesia-Australia Comprehensive Economic Trade Agreement (IA-CEPA).

Helen Brown: Thanks for your time, Prerana. I know that AustCyber has been particularly busy with Indonesia, or its counterparts in Indonesia, over the last 12 to 18 months. Why has the Australian cyber tech industry taken such an interest in Indonesia?

Prerana Mehta: Well, for two reasons. Australia and Indonesia have a strong bilateral relationship in place – both on regional security and also economic trade and investment – well before the IA-CEPA, and certainly with IA-CEPA that’s been accelerated to some degree.

The second point is the IA-CEPA provides a many opportunities, not just for small businesses in Indonesia that are looking at increasing cyber security resilience and looking to learn from Australian companies, but also in terms of skills, education and training.

There is a particular part of the IA-CEPA that refers to skills development, and that provides opportunities for Indonesia to be able to raise its capability, so its workforce is understanding of cyber. There’s a role there for Australian cyber security companies to provide education, training and awareness as part of their cyber platform.

Helen Brown: Obviously those Australian companies are also interested in doing business, so they’re going in and having a look at how they can collaborate, but potentially also work, with Indonesia in the trade space. Do you see more opportunities for that kind of collaboration under IA-CEPA?

Prerana Mehta: Yes, absolutely. So the IA-CEPA has announced a skills package that allows Australian companies to own investment in the training sector.  In other words, Australian training providers can establish a work training business in Indonesia.  Both the training requirements and Qualifications Framework will be accepted.  The Reciprocal Skills Exchange Program gives businesses the opportunity to send people to undertake work related training to Indonesia or Australia – both countries benefit.  Through the workplace skills training program, Australia can actually send people to teach and up-skill in Indonesia and vice versa: Indonesian companies can send their staff and their employees and their teams across to Australia to up-skill for up to 6 months.

This project is fantastic because it’s across a number of sectors, engineering and technical services is one of those sectors and that’s where cybersecurity fits in. But cyber also fits within the financial and insurance services sectors, as well as mining, media and telecommunications. And they’re all areas that this [skills and training] program is looking to be applied in.

Helen Brown: It would probably seem obvious to an Australian what they have to offer to Indonesia in the cyber tech, cyber security space, but there’s probably less understanding about what Indonesia can offer Australia. Why would an Australian industry be looking at what’s happening in Indonesia, particularly in your field?

Prerana Mehta: That’s a really good question. Certainly Australia has a strong capability and strength in cyber security, whether it’s in education, skills and training, or in actual cyber security software, hardware and technical elements. But the one thing that Indonesia has is that they’re masters of their e-commerce and trade and that’s an area that I think we can actually learn. Innovation is taking off in Indonesia across multiple sectors.  Fintech is a great example, about 10 years ago, BCA, one of Indonesia’s leading banks, had digital remote access through tokens to their accounts down pat and Australian banks were still catching up, so I think there is always something that we can learn.

The other thing that Indonesia provides is a stepping stone into the rest of the region. That gateway is a perfect opportunity for Australian cyber companies to be able to take the time to learn and  experience by using the fact that Indonesia is  the largest economy in the ASEAN market,  then be able to reach out to other neighbouring countries.

Helen Brown: And looking at the skills development side of things, would you be keen to see more women entering this field and learning about it and progressing in it? Do you think that would be part of that skills reciprocity, so to speak?

Prerana Mehta: Yes, absolutely. I think it goes without saying that if we should always be encouraging women to be involved in STEM education, careers in engineering and careers in cyber securit.  We would absolutely be looking to do whatever we can to allow that to happen.

Again, the advent of eCommerce and trade in Indonesia has opened up a whole level of opportunity for young women. I still think about the meeting that I was at last year with a group of women and men who are all very, very young it seemed, or at least a lot younger than me, who represented the secretariat of one of the information services and technology industry groups in Jakarta. Around that table sat about four women and two men and they were enthusiastic, confident,  intelligent and absolutely knew their stuff and they were all working with really innovative organisations. These women were in senior positions with Buka Lapak, Tokopedia, Gojek, and I was absolutely blown away by them.  I want to see a lot more of that!

And again, I think it’s a real opportunity for us to learn because I think we don’t do that so well here in Australia. We don’t necessarily have a lot of young women in the tech sector, in senior positions so it’d be great for us to be able to do a lot more.

Helen Brown: Of course, regulation is a very big part of having strong data protection in a country… of having the framework for cybersecurity to operate in a way that is trusted. Firstly, tell us what you see happening in Indonesia around that.

Prerana Mehta: Look, there’s been a lot of work being done in this area last year or it could’ve been early this year actually. The Australia-Indonesia Business Council met with the Secretary for the Department of Trade and they were actually coming to Australia to learn what Australia was doing in the space of their commerce and digital trade.

And I think what we were looking at was what regulation needs to be in place in Indonesia to protect consumers, also to be able to protect the small businesses that are operating on eCommerce platforms and importantly, how do we actually protect the data that’s being transmitted from point A to point B. And when we talk about cyber security, we’re of course talking about the Internet of Things, that anything that is digitised automatically becomes open, automatically becomes available for other people to be able to come in and get that information.

So how do we protect that? How do we set up all of those barriers and how can we do it in a way that’s easy? And I think that’s the one thing that Indonesia has been putting their minds to. So there’s been a lot of change. I know that some of the new regulation was already put into place late last year, and they’re constantly making improvements to that. So that at the end of the day, the small business operator working in a province in Indonesia will be able to sell their goods on an eCommerce platform and know that they’re being protected and know that the data and the money that’s being transferred digitally is being protected very well.

Helen Brown: And from the Australian side, AustCyber recently put out a report called Trust on Digital. That also outlined, I guess, some of the challenges faced here in Australia, even though we are more developed in terms of the infrastructure that is available.

Prerana Mehta: I’m going to pull out some stats in a minute, which allows you to compare how important eCommerce and digital trust is. In Australia, digital infrastructure is core to Australia’s economy and we’ve seen that with COVID.

AustCyber undertook some modeling around a cyber attack and what the impact would be on the economy. We found that the digital economy in Australia contributes about $426 billion, and generates about $1 trillion in gross economic output. When you convert that to jobs, that means that one in six jobs is connected to some form of digital activity.

That seems like a lot, but when we compare it to Indonesia, it’s actually quite tiny. Indonesians spend about $20 billion online, and that’s increasing. So they’re actually increasing by 25 to 30 per cent across the board in the amount that they’re spending online.

And when I say shopping online, I mean, grocery shopping, not just your favorite outfit, so that behaviour is changing quite a lot and what that really means is that we need to build trust. So whether that’s in Australia or whether that’s in Indonesia, we actually need to make sure that the quality of digitisation and trustworthiness is able to stand on its own two feet… that we’re able to ensure that we understand what disruption could mean and that we’re able to ensure that this data and this information is being protected as much as it can. Because, if there was to be a major issue, what would be the impact with respect to economies?

I remember actually around November last year, it could have been earlier, the power went out in Jakarta and it went out for a period of days and I think that was one of the first instances when the Indonesian government actually understood that an attack on their critical infrastructure meant potentially catastrophic outcomes, not just to everyday business, but also to education and to national security. So that’s how important it all is.

Helen Brown: And finally Prerana Mehta, we’ve got the unprecedented event of the coronavirus pandemic, and we’ve got this major economics and trade agreement coming out at the same time. Does that present some challenges within itself and how do you see the next 12 months playing out, given those two convergent events?

Prerana Mehta: Look, I see them absolutely complimentary actually, and I see it very much as an opportunity.

So I see that COVID has brought about innovation, and innovation utilising technology. So that’s a really positive thing. The fact that we’ve got a fantastic bilateral trade agreement between the two countries means that we can sit down and assess how we can help each other to grow and how we can help each other by not just protecting our own economic prosperity, but also mutual economic and national security prosperity as well.

And it’s not just between the two countries. I’ve mentioned the word region a couple of times and I think actually what we do as two countries will have an impact on the region overall as well. So I think it’s very much welcomed.