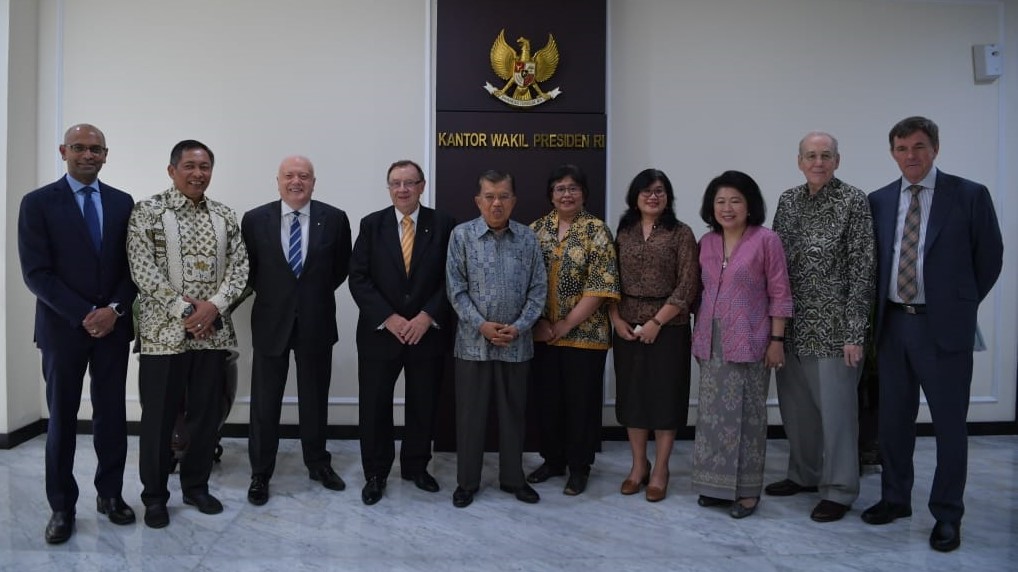 Indonesian Vice-President Jusuf Kalla received the Board of the Australia-Indonesia Centre at his office in Jakarta in September, where discussion focussed on the AIC’s role in supporting Indonesia’s human capital development, particularly through strengthening people-to-people links.

“Through the signing of the [Indonesia-Australia Comprehensive Economic Partnership Agreement] IA-CEPA,” Jusuf Kalla told AIC Board chairman Harold Mitchell, “we can strengthen cooperation in the areas of trade and investment. However, people-to-people links … is the most important factor.”

The vice president expressed hope that the Australia-Indonesia relationship could help to support human capital development in Indonesia – a priority for President Jokowi’s second term, due partly, he said, to a rise in competition between countries, particularly in the Asia region.

Jusuf Kalla described Australia as a country globally recognised for its education system and its technology. He hopes that Australia will support capacity building in Indonesia, helping to equip the nation to compete on the global stage.

Mitchell echoed the vice president’s sentiments and outlined the reach of the AIC’ work so far in various areas. “Moving forward,” he added, “we will extend our focus to the fields of communication, information and media.”

Australia’s ambassador to Indonesia Gary Quinlan emphasised that collaboration under the AIC was not only between the two countries, but also between the top institutions of each country.

“So this collaboration is two-fold, and its wide scope includes projects on data and information. We will align our future agenda with the vision of the Government of Indonesia. Although AIC is not a government agency, it is an institution that is composed of influential leaders,” said Ambassador Quinlan.

Mari Pangestu has been part of the AIC Board for three years. She explained that the AIC differed from other bilateral organisations, in that its network contained subject matter experts. The AIC has previously focused on issues such as combating stunting in young people and mitigating flood risks in densely populated urban areas. The Centre’s new major project, the Partnership for Australia-Indonesia research, or PAIR, will focus on the issue of connectivity in South Sulawesi, specifically as it relates to connecting the cities of Parapare and Makassar, and the many rural areas that lie between those cities along the first stage of the new trans-Sulawesi railway line.

Lead by a team of 52 researchers, the project aims to further accelerate economic development, particularly that resulting from this railway, over the next three years.

“The AIC is not a joint research organisation.” Mari said. “However, the Centre has a capacity building program for researchers and young leaders. How can we ensure that they carry out work that is collaborative, not only among academia but also industry? The IA-CEPA has been signed. Now is the time to realise its potential in education and the economy. [PAIR] is a good start for working towards a mutually beneficial cooperation on more specific issues,” she said.

“However,” he concluded, “the most important thing to improve in Sulawesi is healthcare.”

The vice president was accompanied at the meeting by the head of the Vice President’s Secretariat Mohamad Oemar, deputy head of human development policy and equitable development Bambang Widianto, and special vice presidential officer for bureaucratic reform Azyumardi Azra.

This article is an edited and translated version of an article that first appeared on the website of the Vice-President of Indonesia, Jusuf Kalla.