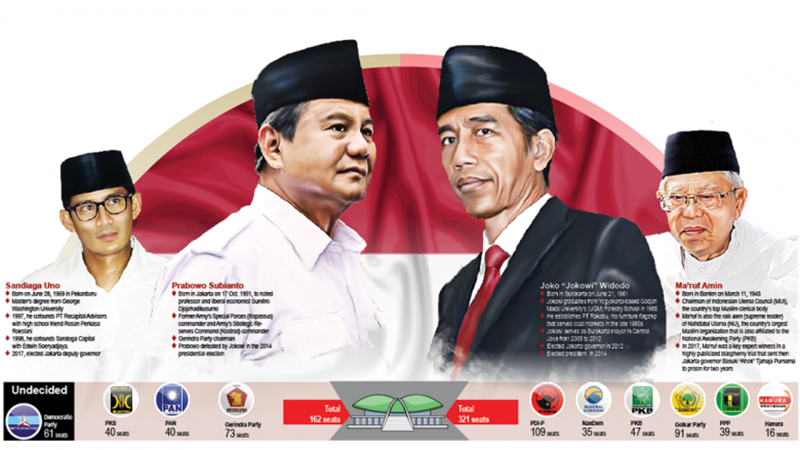 In a surprise move, President Joko Widodo announced Ma’ruf Amin as his running mate for the 2019 Presidential Elections.

“After much thought and consideration from many members of the public I have decided, and have received the approval of the coalition, that the person who will be joining me as Vice President for the 2019-2024 period is Prof. Dr. KH Ma’ruf Amin,” Jokowi said on Thursday.

The announcement came as a surprise to many as former Constitutional Court chief justice Mafud MD was considered to be a strong candidate for Vice President.

The choice of Ma’ruf Amin is believed to be an attempt by the President to win over the Muslim vote. Ma’ruf is the Chairman of the Indonesia Ulema Council (MUI) and prominent member of Nahdatul Ulama (NU), the largest and one of the most influential Islamic organisations in Indonesia. The President regards Ma’ruf as a wise religious leader.

During the press conference, Jokowi said Ma’ruf Amin was chosen for his extensive experience working as a lawmaker, councillor, People’s Consultative Assembly (MPR) member and presidential advisory council member. He is also on the advisory board of the Agency for Pancasila Ideology Education.

Ma’ruf is considered a controversial choice for the more progressive electorate given his role in the trial of former Jakarta Governor Basuki Tjahaya Purnama (Ahok) in 2017 on blasphemy charges. Ma’ruf was a key expert witness who signed a document suggesting a Quranic verse had been exploited therefore considered ‘blasphemous’ for insulting Islam, consequently leading to Ahok’s imprisonment. He is also known for supporting controversial regulations against minority groups such as the Ahmadiyah and LGBTs.

The 2019 Presidential race will essentially be a rerun of the 2014 elections as Prabowo Subianto has officially announced his candidacy to run for President. He has chosen Jakarta Deputy Governor Sandiaga Uno as his running mate.

“This process has not been easy, it has been exhausting… I have continuously been negotiating with party leaders, and building a coalition has not been easy because it requires getting many people together,” Prabowo said in a press conference. He said that he would continue to build a big coalition to provide solutions to Indonesia’s problems, such as the flow of national wealth abroad and systemic issues that prevent equitable distribution of wealth across the nation.

Sandiaga officially submitted his letter of resignation as Jakarta Deputy Governor on Friday morning. Governor Anies Baswedan shared his support for Sandiaga’s decision through his Instagram account, posting a picture of the pair embracing after their last meeting. It is reported that Anies had initially been offered to run as Vice Presidential candidate alongside Prabowo but turned down the offer.

The Prabowo-Sandiaga candidacy has received the support of four political parties: Gerindra Party, the National Mandate Party (PAN), and the Prosperous Justice Party (PKS). In a last minute decision on Friday morning, the Democratic Party announced it would be joining the coalition.

At the time of the announcement of candidacy on Thursday evening, the Democratic Party, founded by former President Susilo Bambang Yudhoyono (SBY), had yet to decide which coalition they would be backing. The political alliance with Gerindra became strained after Prabowo rejected the proposal of Agus Harimurti Yudhoyono to be his running mate. Agus is the oldest son of SBY, who also ran for Jakarta Governor during the 2017 elections. SBY was not present when the party announced its allegiance to the coalition.