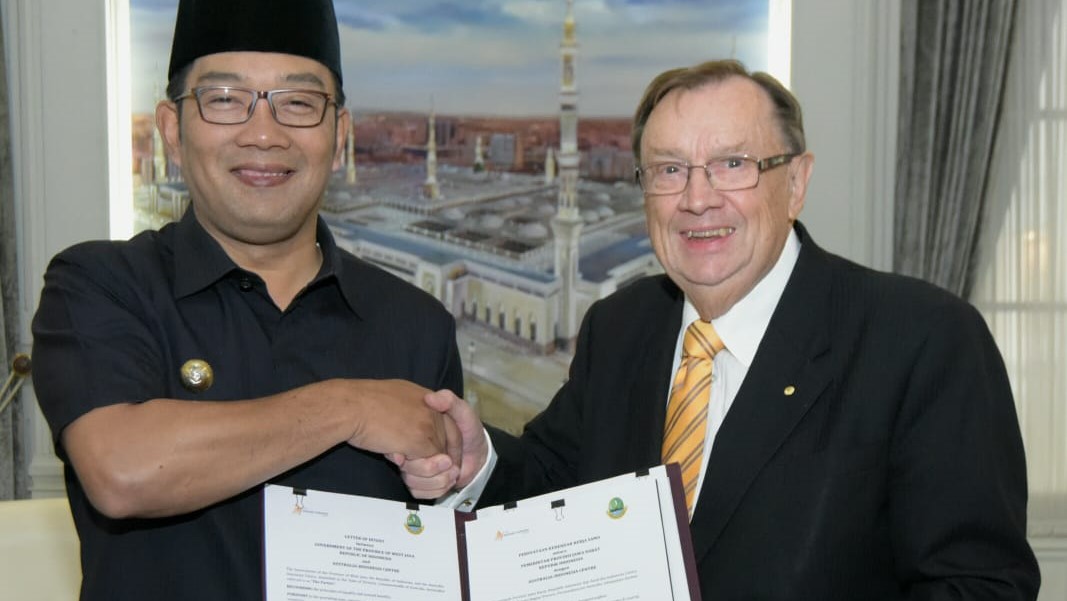 The Australia-Indonesia Centre (AIC) has signed a letter of intent with the West Java Provincial Government, that will pave the way for research collaboration between the two in areas of community empowerment, digital economy, connectivity, and water.

The AIC Board led by its Chair, Harold Mitchell AC, met with Governor of West Java, Ridwan Kamil, on Monday 26 August to discuss research collaboration opportunities.

“The Board was impressed to hear about the very progressive and well-considered plans the Governor has for the future development of West Java,” said AIC Chair, Harold Mitchell AC.

“This is a great and dynamic province, and we congratulate the Governor and his team for the considerable work that is already underway towards realising these goals. We are delighted to be able to formalise a working relationship with the administration, and we see this as the first step towards creating a significant working partnership.”

Ridwan Kamil, known as Emil, said during the meeting that the West Java Provincial Government and the AIC would collaborate to find solutions to development challenges. He outlined some of the challenges facing the province, including revitalising the Citarum Harum (fragrant Citarum River) project and supporting inclusive economies in villages.

Emil also suggested that the AIC conduct research around the digital economy and accelerating development in the “Rebana” Golden Triangle region of northeastern West Java. Previously in 2018, as Mayor of Bandung (the capital of West Java), Ridwan discussed his digital economy and smart city vision with the AIC’s Digital Economy Fellow Helen Brown.

The AIC’s involvement in West Java’s development, the Governor said, was an example of the application of the Pentahelix concept being applied by the West Java Provincial Government, which brings five elements together – ABCGM (academia, business, community, government, and media) – in development work.

“[The AIC’s] research will assist us with our development. This is a form of the Pentahelix not just made up from one country, but internationally,” he explained.

“Research like this is really necessary. Absolutely, we are open to anyone with positive ideas for West Java.”

West Java is the most populous province of Indonesia – projected to reach around 50 million people by 2021, or double the size of Australia. The region’s economy grew by 5.5 percent in the first quarter of 2019.  There are already 209 projects underway – in transportation, water resources, housing and settlement, energy and industrial zones – valued at nearly $60 billion.

At the event, a letter of intent was signed as a symbol of each parties’ commitment to working together. “We immediately signed a letter of intent,” Emil said, “to show we are serious. So, now for a plan of action!”

The AIC leadership team will continue to work closely with the Governor’s office to flesh out a program of work.