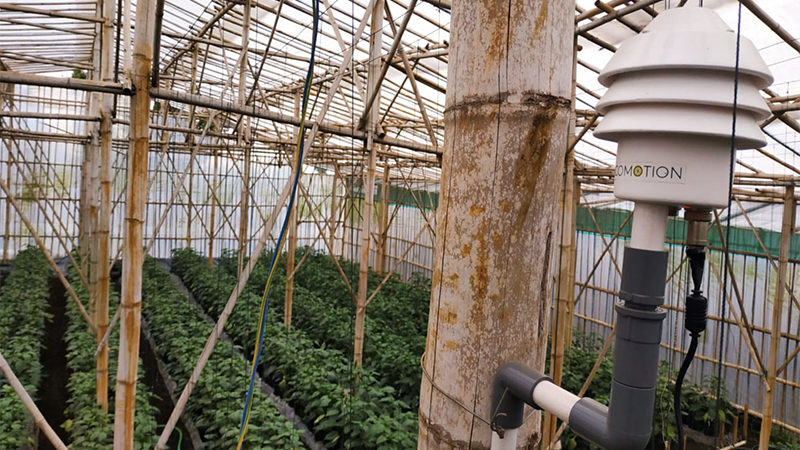 BANDUNG, itb.ac.id – Nugroho Hari Wibowo, an alumnus from Engineering Physics of ITB, develops a smart irrigation system which water plants according to its needs (precision farming). He develops the innovation with nine other core members of his company, BIOPS Agrotekno. “We want to bring a new era to farmers in Indonesia and increase crop yields both in quantity and quality,” Nugroho said.

Veggies and fruits are sensitive to amount of water. Excessive water will make them rot, while lack of water will result in non-optimal nutrition. Fortunately, the problem now has a solution. It is proven that by using Encomotion, veggies and fruits grow consistently, have wider leaves, and have wider stems.

Nugroho said that, compared to conventional farming, Encomotion increases productivity by 40%, saves time by 50%, and reduces water and fertilizer use by 40%. Now, farmers can have more precise data on their plants. It prompts farmers to move according to data and not mere instinct.

Under guidance from LPiK-ITB, since 2016, BIOPS Agrotekno receives more business insight. Encomotion is commercialized in three ways, purchase outright, rent, and production sharing. These business models are considered the best because BIOPS was established to become a mutual partner to farmers. They want farmers to understand the need of their plants based on concrete data without worrying too much about money.

Bringing a new era to farmers in Indonesia is not an easy task. Development of system began in 2010 and researches relating to further system development are continuously conducted. BIOPS is preparing Encomotion for use on bigger farming location, as well as giving solution for other two main problems, pests and fertilizer. “Fertilizer is expensive. If farmers do not know how much fertilizer to apply, it is the same as throwing their own money to the soil. That is why we are currently developing fertilizer calculator,” Nugroho said.

Educating the farmers is the most difficult challenge to BIOPS due to majority of farmers in Indonesia aged more than sixty years old and only elementary school graduates. BIOPS also have to keep working on their products. “If production of vegetables and fruits excessive, over productive, the price will plummet and farmers will end up with loss. Therefore, BIOPS is currently developing product extraction relating to this problem. If the commodity is abundant, the product should be processed and not sold as raw product. Therefore empowerment to farmers is also important,” he said.

Winning many competitions and receiving funding up to hundred million rupiahs, BIOPS Agrotekno still need responds and suggestions regarding their product. Nugroho said they still find problems on field, such as electric power and network signal on several locations. BIOPS pursue smart collaboration since development of system requires contribution from various disciplines of science.

“Indonesia used to get occupied for its abundance of agrarian potential. Our country should be powerful for its natural resources. Indonesian agriculture will rise,” Nugroho concluded.