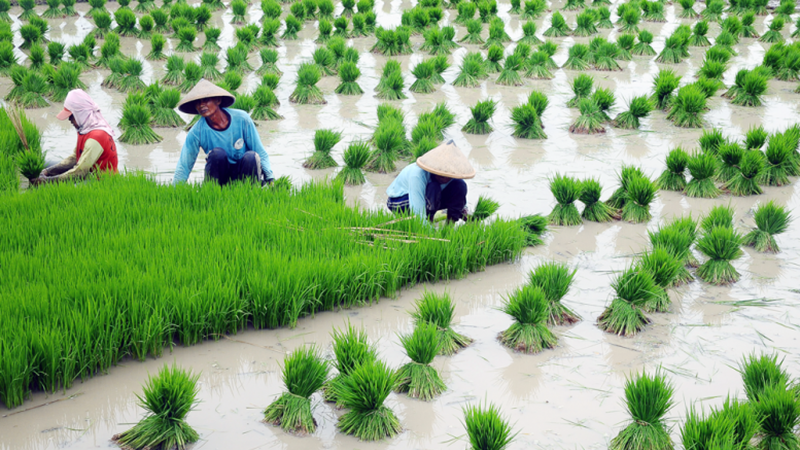 Indonesian farmers are set to be more efficient and make more profits, as the government rolls out a specialised agricultural training program as part of a national push for food self-sufficiency.

One way in which the government has sought to fill this gap has been with the introduction of agricultural instructors. Indonesia currently has 17,000 instructors which have helped farmers to raise the productivity levels of various commodities, and Jokowi hopes to increase this number to 40,000 instructors.

This is part of a larger issue in Indonesia – that of food self-sufficiency.

As the elections loom on the horizon, food sovereignty is high on the agenda for the two presidential candidates. In 2014, Jokowi outlined his vision as ‘The creation of an Indonesia that is sovereign, independent and has an identity based on gotong royong‘, (meaning working together to achieve a shared goal). His priorities were laid out in the Nawacita pledge, which included a roadmap to achieving self-sufficiency by 2045.

With its focus on reducing imports and increasing domestic production, the roadmap set specific targets, including self-sufficiency in rice, shallots, chilli, corn, soybean and household sugar by the end of 2019.

In 2014, Indonesia imported 3.5 million tonnes of corn annually. As of late 2018, imports have fallen to 100,000 tonnes, and exports have risen to 380,000 tonnes. The Minister for Agriculture, Andi Amran Sulaiman, cites the agricultural instructor program as integral to this growth in the sector. According to him, continued government efforts are needed to boost national corn production. Highlighting that this could have flow-on effects to the poultry industry, he says “The partnership of corn farmers and poultry farmers is key in realising national corn self-sufficiency and increasing the volume of exports, while fulfilling the needs of animal feed”.

Moving forward, advancing the agricultural industry is a clear priority for Indonesia – particularly when it comes to supporting farmers.

“Independent farmers have to be smart… in agribusiness [it takes] creativity to get results”, said Deputy Governor of West Java Uu Ruzhanul Ulum at an event aimed at boosting leadership and independence among farmers on Friday 1 February 2019. According to him, farmers who focus on utilising creativity in their business practices will not only add value to the Indonesian economy, but also improve their own welfare.

A study carried out by lead researchers Professor David Guest of The University of Sydney and Dr Nunung Nuryartono of Bogor Agricultural University emphasises that supporting farmers through education around better agricultural practices is crucial to improving farmer health and wellbeing.

It’s clear that working towards a future of shared sovereignty is a priority for Indonesia – and that prioritising the voices of farmers themselves is critical in achieving this.