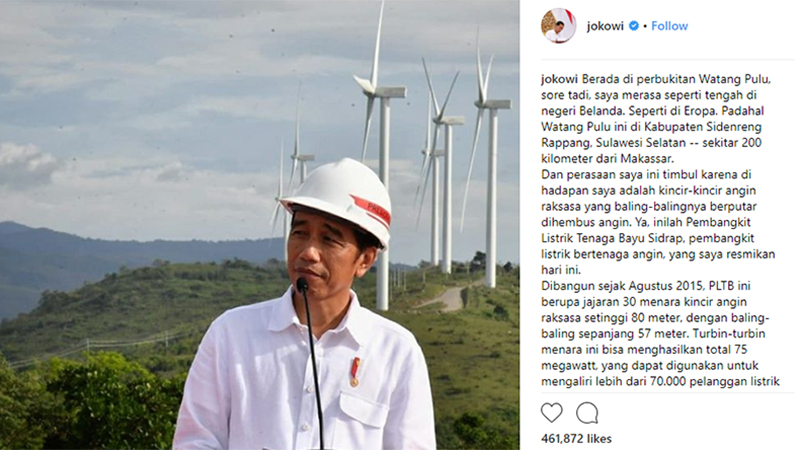 President Joko Widodo inaugurated Sidrap Wind Farm Monday, 2 July 2018. Construction began in August 2015 and it is the first of its kind in Indonesia. The project is managed by PT UPC Renewables Indonesia, with an estimated total investment of US$150 million.

Located in Sidenreng Rappang (Sidrap) Regency in South Sulawesi, the wind farm is built on 100 hectares of land and consists of 30 windmills, each one 80 metres tall with 57 metre propellers. Sidrap wind farm is expected to produce 75 megawatt (MW) of energy and provide electricity to 70,000 people in South Sulawesi, with an average power of 900 Volt Ampere. President Jokowi stated the operation of PLTB Sidrap has increased South Sulawesi’s electrification ratio to 99 percent, above the national ratio of 96 percent.

Indonesian state-owned electric company PLN Director Sofyan Basir said an agreement was made with PT UPC Sidrap Bayu Energy to purchase electricity for US$11.3075 cents per kWh. This is more expensive compared to coal, which is sold between US$5-7 cents per kWh, due to the use of new renewable technology. However, the price of electricity will be cheaper in the long term as the wind farm only requires 50 operational staff. Minister for Energy and Mineral Resources Ignasius Jonan expects a return of investment within eight years.

Sidrap Regency has been gaining popularity as pictures of the inauguration went viral when President Jokowi shared the news on his social media platforms. His Instragram post of Sidrap has now received over 450,000 likes, while his Facebook post received over 54,000 reactions and 6,000 shares. Similar posts on Twitter have been liked 11,000 times and shared 4,000 times.

In his speech, the president said the wind farm made him feel like he was in the Netherlands and mentioned the potential increase of tourism in the area and a boost to the local economy. Sidrap is located around 200 kilometres north of Makassar and is known for its beautiful landscapes. Toraja, another well-known tourist destination in the province, is also only a two-hour drive away.

Minister of Tourism Arief Yahya stated that there is potential to create a tourism package to explore the landscape and culture of Sidrap and Toraja. He also noted several other attractions in Sidrap ready to be developed, especially in terms of access and amenities. Among them are Siderreng Lake, Salu Maridi Waterfalls and Puncak Malloci.

The Indonesian government continues to fulfil its commitment to developing renewable energy with a second phase of Sidrap now under construction as well as a new wind farm in Jeneponto, also in South Sulawesi. Jeneponto is being constructed by Vena Energy (formerly Equis Energy) and will have 20 windmills with a generating capacity of 72 MW and is expected to come online 2019.

AIC Energy Cluster led visit to the Jeneponto site for government and industry leaders as part of its Renewable Energy Field Study & Seminar in Makassar in March 2018.