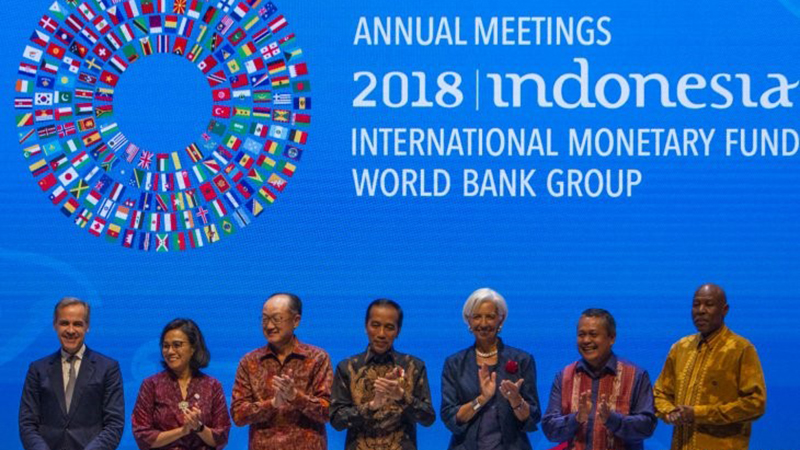 The 2018 International Monetary Fund (IMF)-World Bank Group Annual Meetings ran from 8 – 14 October in Nusa Dua, Bali, and was attended by up to 34,000 participants. This week’s Media in Brief features a round-up of the key headlines from the week-long event.

On Thursday 11 October, the IMF and the World Bank jointly released a policy paper known as the Bali Fintech Agenda, which outlines recommendations for harnessing the rapid rise of financial technology across the world. While the paper outlined many opportunities to support growth and reduce poverty, it also cautioned against the potential risks posed to financial systems and communities globally if left unregulated – of particular concern was the rise in cryptocurrency such as Bitcoin. IMF Managing Director Christine Lagarde highlighted that greater international cooperation is necessary to ensure that “the fintech revolution benefits the many and not just the few”.

The paper detailed 12 considerations for policymakers when designing policies and regulations for fintech, aimed at maximising the potential opportunities for economic growth. Among these opportunities are increased efficiencies and competition and cost reduction, in addition to widening the scope of access to financial services, particularly in low-income countries. “Fintech can have a major social and economic impact… all countries are trying to reap these benefits, while also mitigating the risks,” said Lagarde.

President Jokowi, a keynote speaker at this event, noted that while Indonesia had a long way to go with regards to policy and regulatory frameworks for the rapidly growing fintech industry, he believed supporting the industry is crucial to economic growth.

According to the IMF, the Indonesian government has effectively supported a healthy economy despite uncertain global conditions. Lagarde highlighted that an IMF loan is not necessary for Indonesia, as the Indonesian economy has maintained resilience in the midst of disaster-stricken conditions.

Director for the Department for Fiscal Affairs at the IMF Vitor Gaspar spoke to the importance of transparency for the Indonesian public sector, as well as the need for continued efforts in strategic infrastructure initiatives. According to Gasper, “Existing efforts to build infrastructure must be accompanied with human resources projects, and those can’t be separated from the increase of qualities in education and health sectors”. Minister for Indonesian State-Owned Enterprises Rini Soemarno echoed Gaspar’s sentiments, calling for greater investment in infrastructure to support improved productivity and economic growth.

As part of the panel ‘Realising Indonesia’s Economic Potential’, Governor of Bank Indonesia Perry Warjiyo noted the need for strengthening Indonesia’s economic security via domestic investment. In the long term, he also argued for the prioritisation of the further development of digital economy in Indonesia.

Speaking at the Infrastructure Forum 2018, head of Indonesia’s Investment Coordinating Board (BKPM) Thomas Lembong said that “Indonesia’s prospects in the long term are bright”. In the context of the World Bank’s focus on human resources in Indonesia, Lembong emphasised that investment in education and training is key to create a skilled workforce.

In light of the recent disasters in Central Sulawesi and Lombok, the week-long event also featured a donation agenda to support victims. Bank Rakyat Indonesia in collaboration with Bank Indonesia devised a program called ‘A Cup for Solidarity’, whereby participants of the event are able to enjoy a cup of coffee by donation, with proceeds going towards disaster relief efforts.

The organising committee of the event also reported that IMF management and staff will donate Rp2 billion for victims of the earthquakes in Palu, Donggala and Lombok. Further donation initiatives will be carried out by Bank Indonesia, through the Bank Indonesia Social Program which aims to assist in the reconstruction of five mosques and two schools buildings.