Co-ops encouraged to adapt to the digital era 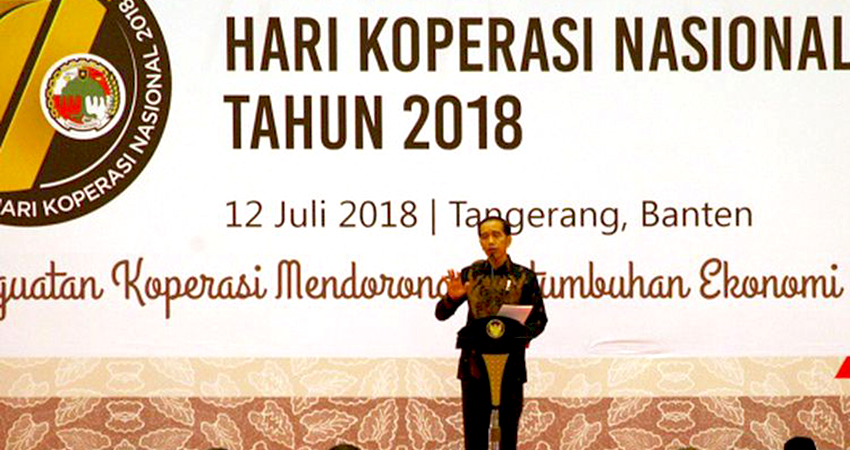 Indonesia commemorated the National Cooperative Day on Thursday 12 July 2018. During his speech in Tangerang, President Joko Widodo urged Indonesian co-ops to embrace technology and adapt to the digital era. The President believes that Indonesian co-ops have great potential to generate high turnover and that he would like to see an Indonesian co-op among the top 100 co-ops in the world. Jokowi gave the example of Fontera in New Zealand that worked with over 10,000 dairy farmers and now produce 30% of dairy products worldwide.

Co-ops are a significant part of Indonesia’s economy. Cabinet Secretary Pramono Anung stated the existence of co-ops played a dominant role in stabilising the national economy during the 1998 and 2008 global financial crisis. According to the Minister of Cooperatives and SMEs, AA Gede Ngurah Puspayoga, co-ops have experienced significant growth in the last few years. In 2014, they contributed only 1.71% of the GDP. By the end of 2017 this number grew to 4.48%. This amounts to Rp451 trillion, or approximately the equivalent to AUD42.3 billion. Based on Indonesia’s Online Data System at the Ministry, there are 153,171 registered, active co-ops with over 26.5 million active members, around 11% of the national population.

Co-ops are created by the people and for the people, where its members are both the owners and consumers. The main goal of Indonesian co-ops is to develop the wellbeing of its members and is an important platform for communities to generate economic and social strength to fulfil their daily needs.

However, co-ops are still often overlooked as an important player in national development and economic growth. As mentioned in an article by Kevin Evans, among the reasons for this is because co-ops are perceived to be second-rate economic agencies for the poor, and welfare systems as opposed to wealth generators. An opinion piece in Bisnis Indonesia acknowledges co-ops in Indonesia have not been utilised to their optimum potential, and that modernisation in organisational and operational management is required for co-ops to develop and fulfil members’ needs.

In terms of keeping up with the times, a number of government officials have echoed President Jokowi’s message for co-ops to modernise and embrace digital technology. Central Java Governor Ganjar Pranowo stated co-ops must make that leap into selling and marketing using digital systems.

The President himself said the technology used does not have to be complicated. “It doesn’t have to be advanced. Start with teaching members how to use and communicate through WhatsApp,” he said.

He also encouraged co-ops to take advantage of social media platforms such as Facebook, Twitter and Instagram, as well as online applications such as Tokopedia and Bukapalak. Jokowi believes that by embracing technology, Indonesian co-ops will continue to grow rapidly, as they will be able to reach all communities without distance becoming a barrier. “With the internet, there is no longer such thing as 1000 metres or 1000 kilometres,” he said.