In December 2018 three Yolŋu artists from East Arnhem Land arrived in Makassar, South Sulawesi, to retrace the sea-faring trade relationships of their ancestors; relationships illustrated, to this day, through visual art, stories and place.

Please note: Trading Cultures is currently available for viewing on SBS on Demand. The documentary can be streamed from now until 25 August 2022.

The trio, Barayuwa Mununggurr, Arian Pearson and Dion Marimunuk Gurruwiwi from the Buku-Larrŋgay Mulka Centre, then teamed up with local artists Adi Gunawan, Nurabdiansyah and Muhammad Rais from Rumata’ Artspace to explore this history together, and envision a future enriched by it.

Trading Cultures is a collaboration involving the Australia-Indonesia Centre and the University of Melbourne’s Wilin Centre for Indigenous Arts and Cultural Development. It is a unique research project that explores the themes of identity, trade and cultural exchange through artistic practice. The project gives voice to the traders and trades that were flourishing before the 21st century, and, most likely, long before 1700.

“When we talk about culture there is no border,” says Nurabdiansyah, or Abi, one of the artists on the exchange and a graphic design lecturer at Makassar State University. Borders imposed from afar were to separate these friends and traders. As Australian Consul General in Makassar Richard Mathews notes in his blog: “The end [of this trade] began gradually as the Australian colonies began to assert sovereignty over their borders.”

Having severed this relationship, those involved in trade and communication between Australia and Indonesia have a duty to support its reinvigoration. IA-CEPA, our countries’ latest partnership, is blurring our borders in many positive ways, but we cannot flourish as neighbours without fully understanding our history, and enabling the preservation of natural and mutually beneficial relationships such as that between the people of Makassar and the Yolngu of north-eastern Australia.

Central to the project’s aim of raising awareness, the artists’ journey was captured by Indigenous filmmaker Daniel King in a documentary that premiered in Melbourne on Friday 8 November 2019.

The documentary was, not surprisingly, as stunning in its scenery as in its ideas; the six artists and company toured not only key historic sites in South Sulawesi, but also in Darwin and Arnhem Land, where they looked across the sea to an ancient burial ground for Macassan sailors. There were new ways of understanding and glorious visions of a revived friendship at every turn. The original musical score, recorded by some of the six artists, added another level to the spectacle.

“Australia and Indonesia can repair their relationship maybe not through politics but through a cultural relationship… because when we talk about culture there is no border,” said one of the participating artists from Makassar, Nurabdiansyah.

“Australia and Indonesia have a border in many ways, but in cultural terms, there is no border…. It’s just an administrative border.”

A crowd of eighty were gathered at the Victorian College of the Arts (VCA) in Southbank, Melbourne, including historians and other academics, film students, and supporters of the arts and the Australia-Indonesia relationship, including a big group of Melbourne’s Makassar community. Many of them were friends of Makassar local and co-lead of the exchange project Lily Yulianti Farid, who did her masters and her PhD at the University of Melbourne (home of the VCA).

The film, Lily said, was “an opportunity to build a new cultural bridge…. The story of these people-to-people connections, I believe, will be lost forever [if it is not revived now].”

“I do hope that this film will travel far… and open more opportunities for discussion about the historical relationship and what it means to us today.

“Universities need to acknowledge the importance of this kind of introduction to Australian history, emphasising the historical relationship between Indonesia and Australia.”

The theme for the Makassar-Yirrkala Artist Exchange Program from which this documentary  came was ‘What was, what is, and what can be’, and Daniel King’s film along with passionate speakers during the evening left the question of ‘what can be?’ hanging before the audience.

There are important questions about Australia’s identity, and the Australia-Indonesia relationship, that need more reflection, and this film, Dr Lily Yulianti hopes, “will serve as the beginning of a conversation” where these questions see more light.

Other distinguished guests added a wealth of commentary to the evening, most notably Australia first Indigenous archaeologist Dr David Johnston who shared a heartfelt Welcome to Country as well as reflections from his 27 years of archaeology consulting around Australia.

The screening was officially opened by AIC chair Harold Mitchell AC and Consul General for Indonesia, Ibu Spica Tutuhatunewa.  Richard Frankland, former associate professor at the VCA and co-lead of the project, convened a panel discussion after the film with Dr Lily Yulianti, Abi, filmmaker Daniel King, and Helen Fletcher-Kennedy, chief operating officer at the AIC.

This article was first published on 10 December 2019. 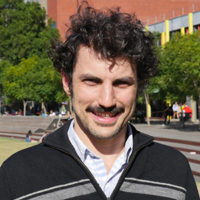