Home » Culture » The Power of Sports

The Power of Sports 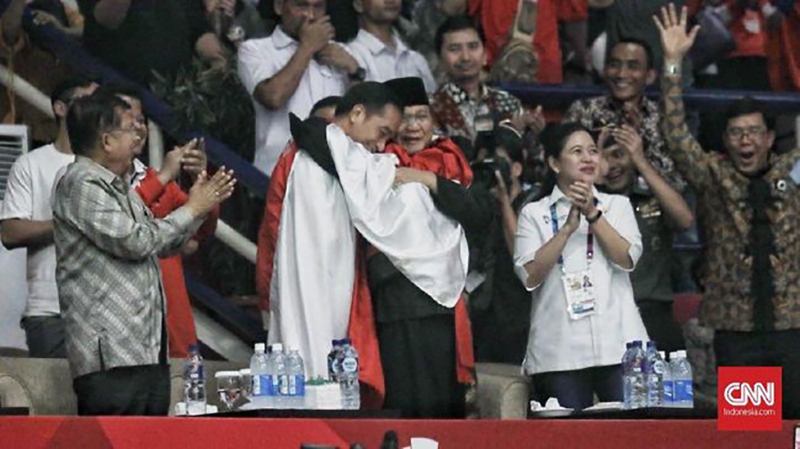 Sports has always had the ability make people put aside their differences to achieve a common goal, even if it’s just for a brief moment. We see it in the World Cup, the Olympics and even in Australian footy. The Asian Games is no different.

The past few weeks have seen several significant moments of unity throughout the Games. We saw the first during the Opening Ceremony where North and South Korea marched together while waving the unification flag. The two countries created a team consisting of 58 athletes from both nations to compete in three events. The unified Korean team won a historic first gold medal in the women’s 500-meter dragon boat race in Palembang on Sunday 26 August.

Indonesian Minister of Foreign Affairs Retno Marsudi said in an interview, “The Asian Games is not just about sports, but also about Indonesian engagement with the world. Indonesia has received appreciation because this event has solidified friendship and peace between North and South Korea.” She further said the representatives from both countries approached President Joko Widodo after the Opening Ceremony to express their gratitude to Indonesia for consistently working towards peace in the Korean Peninsula.

A sense of unity is also being felt among Indonesians. As Indonesia is facing what is to be another contentious Presidential election next year, it is not surprising that social media has already been filled with heated debates and exchanges from both sides of the aisle.

However, several people on social media have noted how the Asian Games has brought a breath of fresh air and brief relief to their timelines in the past week. Indonesian supporters have been jubilant about the achievements of its athletes as the nation has exceeded its target of 16 gold medals to now having won 30, with a total of 90 medals, and overtaking Iran to fourth place in the overall medal tally.

Twitter user @gilangpmks tweeted “The best way to fight racism is [through] sporting achievements, no one made a fuss when Jojo made the cross sign, no one protested that Lindswell is Chinese [descent], no one cares that Lilyana is from North Sulawesi but is nicknamed Butet [North Sumatran], no one got angry that Zohri didn’t want to be interviewed because he had to pray, everyone cried when Ginting got injured.” 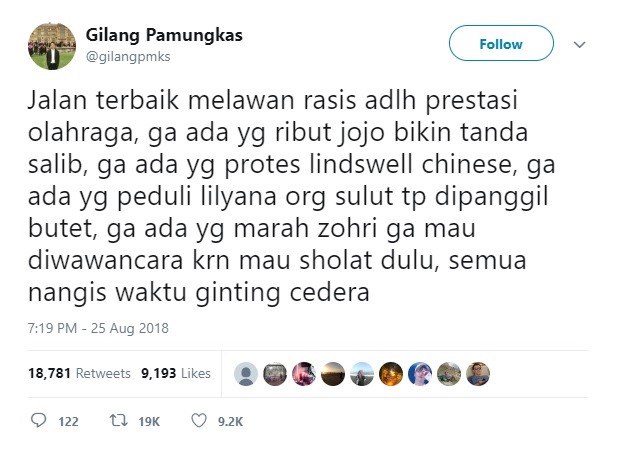 Another viral tweet was by @Rocknal, who wrote about his experience watching the men’s single badminton finals when Indonesia’s Jonathan Christie (Jojo) won the gold medal. He said, “Watching the badminton finals in Istora. Set 2 and Jojo was falling behind, a woman in front of me wearing a hijab shouted ‘Come on Jojo you can do it, Bismillah Jo!’ And the Christian Jojo won gold. That is the Indonesia I know, praying for each other even though we are of different faiths.” Many responded to his tweet saying they had said similar prayers when watching the match at home. 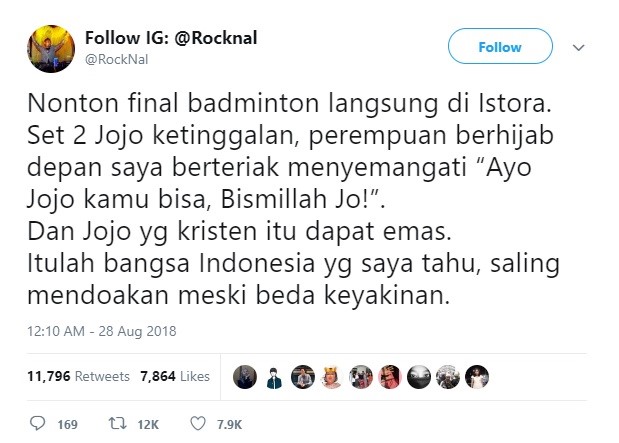 After the medals were presented to the athletes, Yudani, wrapped in the Indonesian flag, went up to the stands where President Jokowi and Prabowo were sitting to shake hands and pay his respects to both men. Then, he pulled both of them in for a hug, which was followed by loud cheers from the audience.

Shortly after presenting a gold medal to Wewey Wita who won the women’s category for pencak silat, President Jokowi posted a vlog he recorded on Facebook with Wewey and Prabowo next to him with all three saying “Everything for Indonesia”. Prabowo is the Chair of the Indonesian Pencak Silat Organisation (IPSI) and President Jokowi thanked him and the athletes for contributing 14 gold medals to Indonesia’s tally.

The Asian Games concludes on Sunday 2 September with a Closing Ceremony held at Gelora Bung Karno Stadium in Jakarta.