Indonesia delivers at the 2018 Asian Games 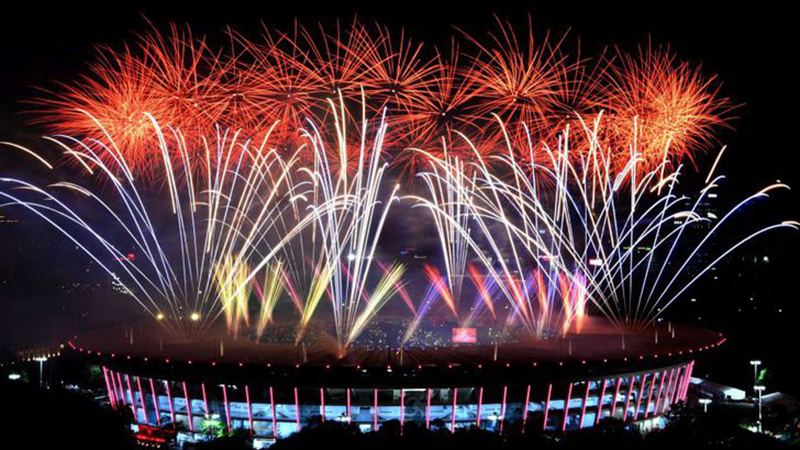 Indonesia wowed audiences across Asia and beyond with a spectacular Opening Ceremony for the 2018 Asian Games on Saturday 18 August. The event was held at the newly renovated Gelora Bung Karno Stadium in Jakarta where representatives from 45 countries and over 50,000 people attended.

Thousands of people were involved in the preparation of the ceremony, with dancers reportedly having rehearsed for over three months. The first performance of the ceremony was the Ratoh Jaroe dance from Aceh, which was presented by 1,600 high school dancers. Many Indonesian singers and musicians also contributed to the festivities, including Indonesia’s fifteen-year-old jazz prodigy and Grammy Award nominee, Joey Alexander, who performed ‘Gending Sriwijaya’, a song from South Sumatra. Other memorable moments include the performance of 21 Indonesian traditional dances and songs, pyrotechnics and fireworks throughout the evening, epic designer costumes, and let’s not forget the athletes of South and North Korea marching together as one behind a ‘unification’ flag. A stunning Kecak Dance using fire preceded the lighting of the Asian Games Torch by badminton legend Susi Susanti.

However, the highlight of the ceremony must be the portrayal of President Joko Widodo’s entrance on motorcycle. It begins with the President leaving Merdeka Palace with full security, only to find himself stuck in Jakarta traffic. He then takes a motorcycle across the streets of Jakarta and enters the venue to a cheering crowd. The stunt is reminiscent of Queen Elizabeth’s entrance to the London 2012 Olympic opening ceremony by skydiving off a helicopter with James Bond.  The video can be viewed here.

As of Friday 24 August, Indonesia is in fifth place with 8 gold medals, 7 silver medals, and 10 bronze medals. The Ministry of Youth and Sports stated it expects Indonesia to win at least 16 gold medals and finish in the top 10 of the medal tally. China leads the tally board with a total of 118 medals.

Indonesia won its first gold in women’s individual poomsae in Taekwondo by Defia Rosmaniar on Sunday 19 August where she defeated Iran’s Marjan Salahshouri. Indonesia celebrated again shortly after as Lindswell Kwok secured Indonesia’s second gold medal in Wushu.  Weighlifter Eko Yuli secured another gold medal when he competed in the men’s 62 kilograms, where he lifted a total of 311 kilograms and defeating Vinh Van Trinh of Vietnam and Adkhamjon Ergashev of Uzbekistan.

China defeated Indonesia in the men’s team badminton on Wednesday 22 August, after Anthony Ginting suffered a thigh injury mid-match and had to be carried out for treatment. China’s Shi Yuqi said in a statement, “This is the first time I’ve faced an injured opponent who wanted to continue the match, he forced himself to keep playing. He has extraordinary spirit. He’s a great player”. Shi Yuqi was seen approaching and talking to Ginting as he was receiving medical treatment before leaving the arena.

The traditional Indonesian martial arts Pencak Silat is making its debut at the Games this year. Legend has it the origins of pencak silat came from West Sumatra when a woman witnessed a fight between a tiger and an eagle and used their techniques to fight off a group of drunks. Indonesia has 22 pencak silat athletes and hopes to be the champions of this branch of sport. The biggest opponents are Malaysia, Singapore, Thailand and Vietnam.

Further information on the 2018 Asian Games can be found on the official website.