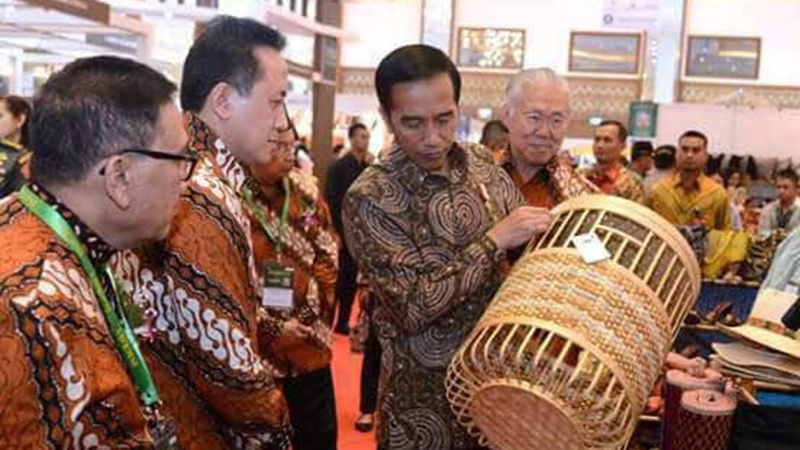 Now in its fourth year, the week-long festival of the Indonesian Creative Cities Network (ICCN) has been hosted in the Sleman Regency – located in the north of Yogyakarta – from 15 to 20 October. With as many as 170 delegates in attendance, the festival represents an important focus for Indonesia – that of creative economy.

In previous years, the event was held in the form of a conference, but Fiki Satari – Chairperson of the ICCN – explained that the festival format made more sense, turning the event into a “celebration”. As part of this, the festival aims to explore a new concept by allowing the hosting city to showcase their own localised creative ecosystems. This year’s event featured a ‘Cities Gallery’, which provides a space for local creators to show their products, while also producing a overview of the local creative economy at play. Deputy Regent of Sleman Regency Sri Muslimatun said that “Sleman does not have natural resources, so we have to be creative… we are working together for prosperity through creativity and innovation”. With over 27,000 small to medium enterprises (Usaha Mikro Kecil dan Menengah, or UMKM), Sleman Regency is no stranger to the potential of creative economy through the UMKM.

The theme of this year’s event is ‘Holopis Kuntul Baris’ – a mix of Javanese and Dutch, which has a variety of interpretations, but most agree that the phrase aims to capture the spirit of cooperation and togetherness. When considered in the context of the ICCN, this theme points to the necessity of interconnectedness to really tap into the potential benefits of creative economy – working together is key. The ICCN’s Deputy of Infrastructure and Capital Access Liliek Setiawan hopes that cities across Indonesia will share ideas, create cross-city conversations, and connect with each other to realise a better Indonesia. The festival is an invitation for government, academics, business and creators to act in collaboration to mobilise the creative economy further.

In early 2015, President Jokowi issued Presidential Decree No. 6/2016, from which the Indonesian Creative Economy Agency (Badan Ekonomi Kreatif, or Bekraf) was born. Bekraf is a non-ministerial agency specifically dedicated to creative economy policies, and its establishment marks a major milestone within this sector for Indonesia.

On 17 October 2018, Bekraf launched a book titled ‘Opus 2019’, which aims to serve as a guideline for government and creative agencies in developing the creative economy – particularly in the areas of fashion, art, music, film and culinary endeavours. Bekraf Deputy Chief Ricky Joseph Pesik explained the book argues that “Indonesia can be a significant player in the world’s creative economy”, with the sector predicted to generate gross domestic product over Rp1,200 trillion in 2019. By collaborating with the Asian Philanthrophic Network (AVPN), Bekraf hopes to further build the creative economy sector through supporting startups and UMKM, thereby supporting economic growth by increasing opportunities for jobs and exports.

The ICCN festival hopes to add to this conversation by creating space for multi-stakeholder collaboration and building a movement centred on the growth of creative communities throughout Indonesia. With future events such as the Ubud Writers Festival (an annual gathering of writers, artists, thinkers and performers hosted in Bali, 24 to 28 October) and the World Conference on Creative Economy (a conference to discuss issues and challenges within the creative economy, also hosted in Bali, 6 to 8 November), the future of Indonesia’s creative economy remains an exciting space.